On our way to Kentucky we were met by PGER Ted Hess at the Charlotte Airport. From there, we flew into the Lexington, KY Airport where we were greeted by State President Bill Frommeyer and his wife Kathy, SDGER Greg Willis, Frankfort Lodge ER Ron Whitaker and PDD Bill Moore.

After checking into the hotel, we were driven to the Frankfort Lodge for a social hour. Afterwards, we had a delicious dinner at the Serafini Italian restaurant, which is a short walk from the Lodge in the historic downtown Frankfort area.

On Friday morning we were off to a guided tour of the Kentucky State Capitol Complex. While we were there we witnessed Governor Bevin sign into Law, House Bill 183, which is titled the Service-Disabled / Veteran-Owned Small Business Certification Program Act. 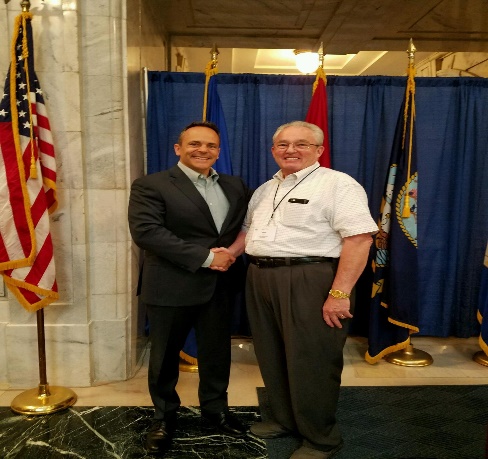 After the ceremony, GER Mike had the opportunity to meet Governor Bevin. In their discussions, Mike learned that the Governor is originally from nearby Wakefield, MA.  The Governor and Mike had a few laughs as the Governor knew the correct pronunciation of Peabody, Gloucester, Worcester and Quincy.

After lunch the group was taken to the award winning Buffalo Trace Distillery for a guided tour. Buffalo Trace holds the title of the oldest distillery in America, remaining operational even during Prohibition – for “medical purposes”.

On Saturday morning GER Mike attended the State Association’s Business Session and heard the committee reports from the various State Committee Chairs about the great works being performed by the Kentucky Elks within their state and in the communities where Elks live and work.

He had the distinct honor of presenting the 2015-2016 Enrique S. Camarena Award to Officer William “Bill” Rudie of the Boyd County Sheriff’s Office for his dedicated work with the “DARE” Drug Awareness Program.

He also was given the honor by Diane Yates, Major Charity Project Chairman of presenting $6,000 checks to each of the two, Kids with Cancer Camps.

On Saturday, Kathy Frommeyer hosted GER First Lady Donna and Susan Kirkpatrick, wife of the West Virginia State President Roger Kirkpatrick along with The Kentucky State Ladies Auxiliary at their annual auction and luncheon held at the Kentucky Special Olympics Building, Lakeview Court. Donna was the successful bidder on a beautiful 12×16 print of a horse that was drawn by Jessie Randall.

Jessie is a young lady who was diagnosed with stage two breast cancer. After surgery and three rounds of chemotherapy she is now cancer free.  The Ladies Auxiliary sponsors the annual auction to raise money for the ENF.

After Dinner GER Mike addressed the Kentucky membership and congratulated the state for achieving a positive gain in membership during the 2015-2016 fraternal year. He also told them that they should be very proud of their contributions to the Elks National Foundation.  Every Lodge in Kentucky exceeded PGER Ron Hicks per capita goal of $4.65.  In fact, the state recorded a per capita of $10.86.  Donna also addressed the members and guests and thanked them for the outstanding hospitality shown them.

Donna and I were presented with a number of terrific gifts at Saturday evening’s banquet. Donna loves the Pandora Horse Charm that was presented to her. We will treasure them always as we will treasure the memories of our wonderful trip to Kentucky.

Donna and I were also presented with certificates and plaques from Governor Bevin granting both of us the title of Honorary Kentucky Colonels.

GER Mike thanked State President Bill Frommeyer and the State Association that they are very fortunate indeed to have such dedicated members and officers in their state. He commended each and every one of them for carrying on the programs of Grand Lodge and for continuing to prove that “Elks” are “Leading the Way.”

Send us your GER photos and stories

Have a photo of Mike in your state or a story about his visit? Send it to stevedocd@comcast.net and you may see it here on his blog.
%d bloggers like this: